This tri stuff is a lot of work!

I finally made it; first time ever I went to a track workout at the Clark Kerr track in Berkeley. Eight seasons of East Bay Run where I'd never scoot over there in the dawn hours, but I went there after work yesterday. It's not really the easiest place to find either. The track itself is off the road, hidden away. I got there early and was able to chill for a while, knitting away. A nice rest and needed! 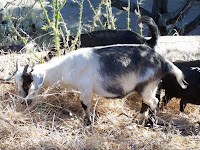 The track is a dirt track in the hills with a gorgeous view of the entire bay. I was fortunate that my first time there was a totally fogless evening, we could see practically to the Farallones. Well, maybe a slight exaggeration. But for the few seconds that I had a chance, it was beautiful looking that way.

And the goats! The hillside was being groomed by a large herd (trip, tribe) of goats. Big ones, little ones, gray ones, black ones. They seemed fascinated by our workout and probably would have liked to join us. Bad idea little goatlings, our workout was hard! 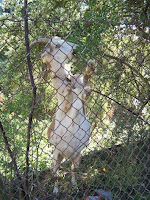 Hi, I'd like to join the Team!
Before the workout Coach Paul asked for shout-outs. Either the crowd is very lucky not knowing anyone who currently has Leukemia, Lymphoma or Myeloma, or they're just private or shy. Since my very personal honoree is dead I don't open my mouth. I sent quiet shout-outs to my other honorees, Raji and Anita's sister. It was a nice moment and reminds people that we're not just there to become studlier.

You can get the gory details of the track workout from Phil's blog over here. Being much slower than him I only had to do the circuit once. As the warmup I ran 4 laps, then 5 laps during the circuit training, then another 4 laps to cool down. I probably did the first ones too fast and I concentrated on slowing down the last ones. Heh, I'm consistent enough that each lap on my final mile was 2 seconds slower than the previous one. And I was really trying to go slower.

I'm reconfirmed to myself that I'm abysmal at circuit drills, one of the reasons I've blown off track in the past. I have zero upper body strength. I'm completely unable to do one of the side planks. Just Can. Not. Do. Them. And yes, there were coaches everywhere, correcting form and very nicely not laughing at my attempts. I managed 5 push-ups, done regular instead of girly style. I'm so careful of my knee that I just don't want any weight on it so I tried the regular ones and no, my form wasn't perfect.

Leg lifts (even done correctly), squats, no problemo. I refuse to do any lunges so I was told to substitute more squats. I find that although my doc warned me about doing them, if I'm very very careful and use good form I can get them done. Unlike lunges which always hurt my knee. As I went to do the crunches I asked Coach Paul whether I should have bent or straight legs; he said either, the upper body form was more important. I told him that I actually have pretty strong abs, in fact I've always thought that if I lost 40 pounds I'd have a great six-pack. I managed to crack him up on that one.

I think by the time I finished the entire circuit all of the coaches had found out I have knee issues, which I had sort of wanted to keep quiet. I don't want to be the injured one, the one they keep an eye on, the one who's different. Bad enough being old and fat and slow so I don't want to add to it. Several of them asked me after the workout how my knee was and I honestly told them it was ok. Hahahah. No, that was a lie. It was very sore and achy by the time I finished. But there are two type of pain I've had in my knee (and all over, for that matter); ow-this-is-sore but will go away tomorrow pain, and holy-crap-I've-screwed-it-up it'll-hurt-for-days pain. I'm thinking I'll spend the entire season with the first type so I'm just not going to mention it. If it isn't advil pain that I'm going to smile and say I'm alright. I know my body, my pain tolerance, my injuries well enough by now to know that I won't have a pain-free season. I'm a marathoner, I'll suck it up.

The worst part of track was the long drive home and not getting out of the shower and headed to food until 8:45 pm. By then I was ready to start chewing my arm off and even a Lean Cuisine takes some time to nuke. I'm highly torn between wanting to eat everything in sight, and realizing I don't need that much food and if I'm careful, I might drop a pound or two. No, I'm not really trying to lose weight but I certainly don't want to gain anything either, and with me it's a fine line. So I don't want to eat 100 calories of energy bar in the car when I can have something good (and slightly more natural) to eat later. I'm going to have to work on this, figure out something to do as our weekday workouts get longer.

I slept well last night, the first time in days. I think I got 6 straight hours of sleep which I haven't gotten for -- um -- weeks, at least. So I'm not as fatigued today as I expected, or as sore. I'm feeling the workout in my upper arms and shoulders, a little residual soreness in my knee. I'm ready for tonight's swim!
Posted by Amy at 11:20 AM