Although technically, it was a DNS. It was actually a "got out of bed at 4:10 am, stood up, coughed up a lung, sneezed a couple of times, coughed up the other lung, called Pam and told her I wasn't running" situation.

I'm totally disappointed. I was supposed to run the Kaiser Half Marathon in San Francisco this morning but that damn cold has settled into my lungs. Don't get me wrong, it's still in my ears and nose and throat, but I have a fierce cough going on now. After calling Pam and asking her to extend my regrets to the rest of the gang I swigged some Nyquil and went back to bed. I didn't get any more sleep but at least the coughing got a little less.

I have a very annoying mindset when it comes to planning things. I LIKE planning things, like having every detail set out in crushing detail, like anticipating every little bit of the thing; I go crazy with disappointment when the thing doesn't happen. Of course, it works the other way too. When I'm dreading a thing, I also pre-live every spirit crushing detail and anticipate all the horror of every thing that might happen. And I still get strangely disappointed when it doesn't happen. Yeah, it's an odd quirk but it's something I recognize and just deal with. In other words, even though I don't really like the Kaiser Half as a run, not being able to run it ruined my weekend.

Because I planned on running a half today I didn't run at yesterday's first Coaches run with TnT. Instead I helped Cap'n Jeanette with the water stop in the chilly almost-40 degree morning air. It was fun seeing all the new peeps coming by, but I missed running and I missed getting together with my group. Actually, I'm not even sure who exactly is IN my group. Nevertheless, GO TEAM!

Friday night was fun. The gang went out to the Elephant Bar in Emeryville to celebrate Anita's birthday. A couple of martinis later we were feeling no pain at all. Ok, not everyone was irresponsible enough to drink but a few of us did. I had a plain ol' vodka martini because I was worried I'd drink a cosmo or fruity thing too quickly. Funny how fast that plain ol' vodka went down. We had a great time eating and talking and eating and talking and drinking and talking.

Since I was headed that way, before Anita's party I stopped at Article Pract to get some help with a wip that I had totally screwed up. I'm knitting the Superlong Wrap from the Knitting to Go box of patterns, using a double strand of black alpaca that I picked up at The Village Spinning & Weaving Shop booth at Stitches Mid-West. When I started on the second skein I somehow started the pattern backwards. It's knit on the bias and I didn't even notice until I had about 6 inches that it was slanting in the wrong direction! Oy! I ended up just ripping the whole second skein off the needles. Then I ripped it back a couple of rows further trying to get it back on the needles. I tried and tried and just could NOT do it. Between the double strand, the black color, an 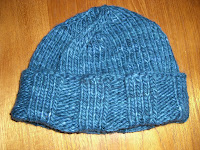 d the pattern I was totally flustered. So I stuck it in a bag and set it aside for a month. It just took a couple of minutes for Song to slide it back on the needles and tell me which row I was on. My Hero! 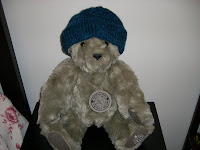 I finished the hat I made for my bro-in-law. It turned out very well. I remembered to double strand the Malabrigo on this one so it's heavier and thicker and bigger than the one I made for my sis.

I have to come up with a nice easy traveling project for next week. Hmmm. Do I need another hat??
Posted by Amy at 4:58 PM