I had a very 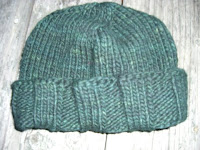 productive weekend, what with all the flying and sitting in airports and all. I had sent my sis the hat I had made for my bro-in law. That was a mistake, since she loved it and planned to keep it. So I needed to make another hat (yay! another hat!). I went through my Malabrigo but most of my colors, except for the black, were pretty girly. Then I saw a skein I had bought just last week (was it only last week?) at Article Pract. The colorway is Cypress, and it's a dark dark green, almost black. I hated to give it up, but anything for my bro-in-law. On Thursday night I cast on and knitted about 3 rows of a new Brangelina. I finished the hat on the plane, and it came out looking pretty nice, if I do say so myself. The color doesn't really come through in the picture, but take my word for it, it's beautiful in daylight. I almost decided to keep the hat for myself, since it was so cold in B'ham, but decided to wear the hat I had brought for myself instead.

On Saturday we went to Knit Nouveau, a great little knit shop in Birmingham. I wasn't going to buy anything because 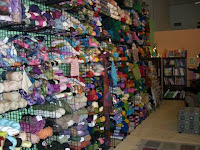 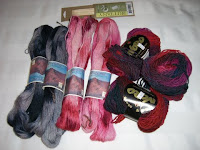 coming up, but of course I couldn't resist. I was actually very restrained, as you can see in the picture. The variegated red/pink/white and black/gray are Araucania Atacama Nature Alpaca; 100% hand dyed alpaca and just as yummy as it looks in the picture. I have no idea what I'll do with it, but I loved it and couldn't resist.

I bought the Noro Kureyon to make a Multidirectional Diagonal Scarf. Petra also couldn't resist the Noro and free pattern and bought a different colorway. Since neither of us had needles of the right size with us and I actually didn't have double points in size 8, I bought the packet and some end caps and let Petra use 2 of them. We both were about 2/3 done by the time we got home and I'm sure she's finished already; I haven't picked up knitting since I've been home so I'll be done in a couple of days. It's going to need to be blocked before I use it. And it'll probably also need to be washed to soften it because otherwise I'll never be able to let the scratchy yarn near my skin.
Posted by Amy at 8:52 AM