(When last heard from, our intrepid heroes were heading back to their hotel rooms instead of participating in the team's final workouts ...)

When I got back inside my room I decided to go through my goodie bag, read the race instructions, affix numbers to places where numbers needed to be. I think my biggest surprise was finding out that you can't crawl during the run; "A participant who gains forward progress by crawling shall be disqualified." Here I'd been telling everyone that I'd finish the race if I had to drag my broken body across the finish line by my fingernails. Darn, that called for a change in plans. I guess I'd have to feel better and stay on my feet.

I got confused with all the race numbers. I knew the big bib went on my race belt for running and the big foldy cardboard number went on the bike and the little sticky numbers went on my helmet. I just wasn't certain where to place the cycling numbers. The logical place to put the bike number would have blocked either my access to my gear levers or to my bottles. I thought that the helmet numbers went back and front, but maybe they went front and side. I decided to leave all of those and take a short nap instead.

After what seemed like 5 minutes (and in reality was only about 30 minutes) it was time to go to the Team's Pasta Party. For the six of you out there who aren't familiar with this little ritual, the night before a Team in Training event is a large gathering of all participants and their family and friends and involves presentations and speeches and bland carbo-licious food. The larger groups normally get a better party, although this doesn't always hold true. As you arrive at the venue, all of the paid and volunteer TnT staff line up and greet the participants with boisterous noise and cheering.

I've been to parties with buffets, parties with terrible food placed in front of you, parties that lasted for an hour, parties that have gone on and on until it's way past our time for bed. This was one of the better ones. The buffet had salad, bread, plain pasta with sauce on the side, pasta salad, cooked veggies. I think there was chicken too. Piled in the center of the tables were pretzels, bananas and oranges. Our group took up almost an entire table; along with me were Claudia and Rocky, Rocky's parents, Phil, Olivia, Lindsay. After giving us time to eat and chat, the presentations started.

There were groups present from most of the western states. We were told how much money, as a group of about 340 athletes, we had raised (a total that escapes me now, but it was a LOT of money; our local team, training for Pac Grove, the Big Kahuna and Nations Tri raised over $178,000). Kudos were given to first timers (me! me!), repeat Team Tri'ers, coaches, paid TnT staff, volunteer staff. The largest fundraisers were called out and man, some people had incredible success. The largest fundraiser of the group won a sparkling new bike, courtesy of TnT's newest sponsor, Schwinn. 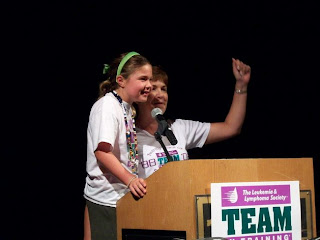 The biggest part of these pasta parties is when we hear from someone who has been personally touched by one of the blood cancers. This time the speaker was our very own teammate, Emma. Her daughter, our team honoree, has recently finished treatment for Leukemia. They both stood up on stage and Emma told the audience about cancer from a mother's perspective, with some comments from Lauren. She talked about diagnosis, treatment and their family life during all of that. It was heartbreaking and informative and inspirational and very well done. How could any of us be scared of a mere triathlon when facing cancer is so much worse. I wasn't able to hold back my tears, thus continuing my record of always getting a little weepy and sniffly at these talks.

After the party Coach Paul gathered our team together for final words of wisdom and the plan of attack for the (early) morning. We were supposed to meet at pre-dawn and ride our bikes to the transition area. With our humongous packs on our backs. Over three miles. In the dark. After walking our bikes for a half mile on a public street since nobody had lights. Claudia and I were among the very few who didn't like that plan (I have enough trouble not falling over when I can SEE where I'm going) and we asked if it would be ok if we got a ride there from Rocky. Yes, it would be. Whew! I was picturing my race being over before it even started because of some stupid incident in the dark. Some more chit chat, more talking, then we all went our separate ways. 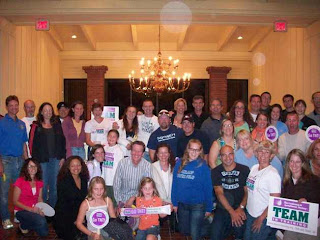 When the first of my three alarms (paranoid much?) went off at 4:15 am I lay still for a few moments, stretched a little, thought about how freaking terrified I was, dismissed those fears and hopped out of bed. I showered and had a cup of coffee and managed to choke down a bowl of oatmeal. That was the first time I've been able to eat oatmeal since my stomach problems began and I took it for a good sign. I took my time finishing up my preparations (and remembered the bottles in the fridge) and met Claudia and Rocky outside the room at 5:30 am. We (they) loaded up the car and we headed over to Lover's Point. We passed all the TnT'ers trudging along the street with their bikes and congratulated ourselves on driving. 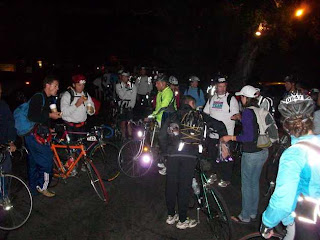 Parking was an issue but Rocky squeezed the car into a teeny space. It didn't really fit, but we decided to let him worry about it. In the pitch dark we headed to our assigned spots in the transition area and attempted to set up our spots by touch. As it got lighter, more people arrived and started filling in all the empty areas and squeezing the bikes together. I chatted with the women near me, all TnT'ers from other chapters. Our coaches were wandering around, assisting and offering advice on gear placement. I got a few tips about which direction to place my shoes and what to place of top of what. 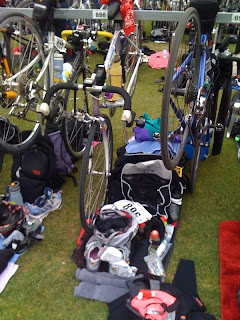 Claudia and I walked down to the beach and walked the entire transition route from water to bike to bike out to bike in to run out. I was glad that Coach Paul had recommended we do that, we were able to find which paths would work best. We also saw the lines for mount and dismount which would come in handy later.

As it got closer to race time we walked over to join the group, including Olivia with her fantabulous sign. When I said a few months ago that she was the Best! Cheerleader! Ever! I didn't even know the half of it! Throw in Lindsay, Phil and Rocky (and his parents), and Lael and I knew we'd be well supported. And then two more of the Best! Cheerleaders! Ever! showed up: Coach Al and Mama Lisa! As coaches for the TnT East Bay Marathon team they've taught me everything there is to know about endurance sports. We've also all become very close. I absolutely love them to pieces and knowing that they'd be there supporting me for my first tri was an incredible boost. Coach Al has taught me a lot about spirit, motivation, pacing and Mama Lisa has proven by example that you can do anything that you set your mind to. The two of them are so genuinely caring and loving and generous with their time and affection and it was fabulous to have them there. 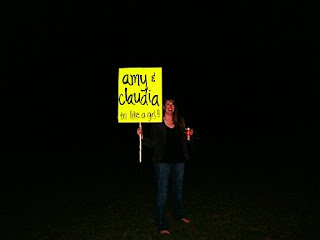 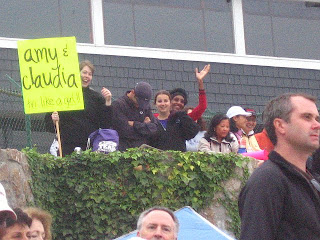 But it was also overwhelming to me. As the first wave of men (boys) got ready to race I was feeling sick and scared and trembly and on the verge of tears. I excused myself from our crowd and said I was going to go get ready but I don't think I fooled anyone. I went back to my bike and sat down, trying to focus, center, ground. Deep breaths, empty my mind. It almost worked, but I was too nervous. A short while later Claudia showed up, took my arm and told me she had something to show me and I had to come with her. Bewildered, I followed along like a trusting child. She requested that I not drown her when I saw the surprise and before I could muster any emotion at all, I saw them:

Bree and Anita had come to cheer for me at my very first triathlon. That was it, the tears started, the ugly cry began. There they were, holding signs and smiling and there for me. My best running buds, my only local peeps left of our very close running group. A surprise to beat all surprises and one that left me -- still leaves me -- feeling loved and cherished. I could not have been more thrilled. Thank you Claudia, for the surprise. It almost makes up for talking me into this in the first place! 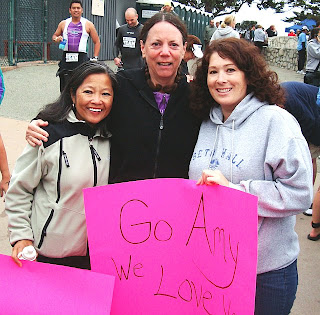 After hugs and pictures and more hugs, Claudia and I left to suit up. We're not good enough at donning our wetsuits to know just how long it will take each time. Coach Paul had said we should be on the beach, ready to go, 45 minutes before our wave. We returned to our friends, had a few more photo ops and hugs and good wishes, then hit the beach. At that point we knew there was no turning back. 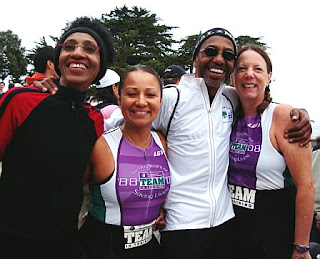 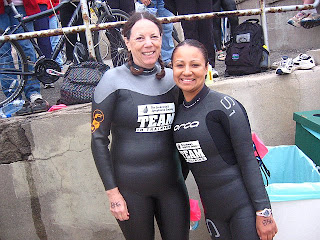 That's a crock, we'd known for months there was no turning back. We met up with our teammates who were in the same wave and got a few more instructions from Coach Paul. The wave before us started and it was our chance to get in the water, get used to the cold. I intended to get in there and release all my anxiety and fears before the start and it even worked a little. The water was freezing, about 55-57 degrees. Good thing I had booties and a squid lid, but I was still icy cold. Nevertheless I stuck my face in the water and blew bubbles until that whole flight or fight reaction was waterlogged and numb. Mission accomplished! I made sure that lots of icy water hit my entire body , that not a thing was left to be surprised at the start of the race. 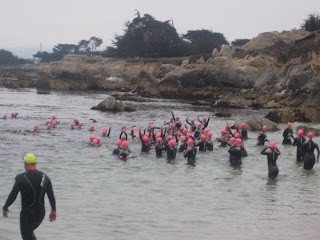 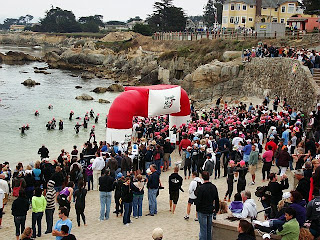 As I got out of the water one of my teammates pointed at my face. My lips were blue. Hey, I was cold! Nothing I could do about it so I just ignored it. We all started lining up for the swim and it seemed that everyone wanted to go in the back of the bunch, which just wasn't possible. Claudia and I ended up about 2/3 back, with scattered women behind and to the side of us. We hugged each other and faced front. This was it, the end of four incredibly tough months of training and craziness about to pay off. It was 8:45 am, 1:30 after race start and time for the pink-cap wave of F29 Under/TnT Female 1 to begin. The countdown started: