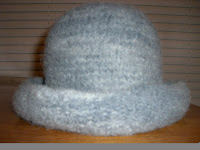 Last night I was multi-tasking. Stuffing envelopes for my fundraising, talking with my mom and felting my hat. La la la la la, merrily stuffing away. Half an hour later I heard, in the background, the washer spinning. Holy crap batman! What about my HAT??? Turns out I caught it just in time, before it became a teeny teddy bear hat. It came out cute. I used the Fiber Trends felted hat pattern. 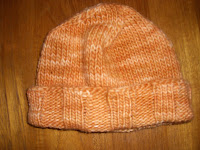 After rescuing my hat and finishing the envelope stuffing, I settled in to finish the hat for my sis before their cold snap goes away. I was using Malabrigo in Golden Ochre. Somehow it came out smaller and lighter weight than the other Brangelinas that I've knitted, so I think the others must have been double stranded. I've knit so many of them, you'd think I'd remember how they were done. Maybe the lighter weight of the single strand will work out better, except for the one or two nights that are sub-15 degrees. Sis will probably be better able to tolerate the wool of the single strand too. Or maybe I'm just fooling myself and I should rip it out and start over with doubles. Umm, no, I think I'll get it in the mail today!

I kinda skipped my workout last night, to get the stuffing/felting/knitting done. Gee, I wonder what excuse I'll use tonight?
Posted by Amy at 8:52 AM