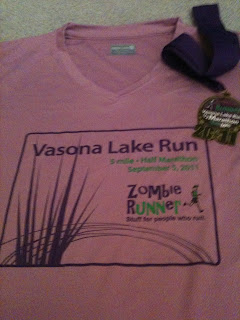 My 20 mile training run went well. For a long run it was -- long. The weather ended up being great; it never got too hot and the sun didn't even come out until my final hour. I ran the last 12 miles alone, greeting all the other runners, walkers and cyclist as they passed by. I ended up tired, with a sore foot but no other problems. I'm pretty certain that's why I asked Bree whether she'd be interested in running a half marathon on Labor Day Monday (... that, and the fact I thought she'd say no).

I thought that Bree would decide that 13 was more than her aggravated ankle wanted to run. If not that, she'd see the profile of this run and decide I was crazy. Imagine my surprise and delight when she wanted to run this! So early this morning I drove down to the South Bay and met up with Bree at her new apartment. We drove, along with another friend of hers, to Los Gatos Creek Park.

We picked up our bibs and shirts and goody bags. The women's shirts were a light purple tech shirt, sized properly (men's shirts were in green). The goody bags had a bunch of ginger chews, a gel and a Zombie Runner pen. We pinned on our numbers and waited for the start.

This is a small race, about 150 people for each of the 5 mile and half marathon races. Both started together down the Los Gatos Trail for the first out-and-back, where the 5 miles finished. We continued on for the hard part.

Somehow when I looked at the website I read that the surface was all asphalt. Notsomuch. When we got to the fire road I wasn't too surprised. I supposed that we'd be on the same fire road part that was run during the Jungle Run. Again, notsomuch. I apparently forgot the hilly part of the run too.

After a very short stretch of fire road we started climbing single track. Knowing that I'm (1) a klutz, (2) afraid of cliff-type edges, and (3) not used to dirt, we slowed down. Since this was an out-and-back route, the mountain goats other runners were coming back down the trail we were creeping up. We stepped aside as much as we could, knowing they were going way faster than we were. The trail continued on in an upward direction. Running had become walking was becoming mincing our way along the rocks and roots.

If we hadn't been out of water I think we would have just turned around and called it a day and a DNF. I knew there'd be water at the turnaround so we kept going. Then it became a downhill. A very, very steep downhill. We didn't run there either, since it was too incredibly rocky and steep. It was absolutely the worst part of the route, even though the route widened. The very scenic view of the Lexington Reservoir made it a little better.

We got to the bottom, refilled and started back up the hill. We had to stop and rest a couple of times - total dead stop while we caught our breaths. After that it was mostly downhill, back the way we came. Funny how in this direction we were running much more than the other direction. I was determined not to spend another 22 minutes on one mile. When we hit the single track we walked, the fire roads we ran/walked. After what seemed like forever we returned to the asphalt trail.

The whole time we were struggling up and down those hills, we saw families with small kids, cyclists, moms pushing strollers, going the same way. Maybe it was that they hadn't already run the first 7 miles, but they were making us look like slugs. Dirty, sweaty slugs.

The route was perfectly marked with some chalk arrows on the ground and pink or polka dotted ribbons hanging from everything that needed to be marked. I think I could have still gotten lost (I'm talented that way) but Bree set me right each time.

We finished the race, and both ended up NQL (not quite last, remember?). We were 152 and 153 of 158 and well within the cut-off time. We were cheered in, given our medals and directed to the fluids and food (pretty decimated by that time, but there were still watermelon slices, candy, chips and pretzels, other fruit and a couple of cookies).

Water stops were about every 2-1/2 miles and well stocked with water, some electrolyte drink, defizzed coke, candy, salty snacks and fruit. Since I had prepared for a 2:50-ish race and ended up with a 3:20 race, I ran out of gu and drink powder before I ran out of race. I grabbed a few gummy bears at the last couple of stops and sucked on them as we ran. The sugar gave me enough boost to keep going.

Taking another glance at the website it turns out the run was 68% asphalt, 20% fire road and 12% single track. It also says the gain was 945 feet. It doesn't say that all the elevation was in the 32% not asphalt.

I'm glad I ran this race. I don't think I was really properly prepared for that much not-road, nor were my legs really happy with 13 miles after last week's 20. My foot was again sore starting at about 2 miles. I probably won't become a trail runner any time soon, I enjoy asphalt too much. This race was very well done, especially considering how small it is. I don't think it would work as well if the single track got more crowded so this was the perfect size.

Oh, and the weather again was close to perfect. It was forecast earlier in the week to be hot by 10 am, but it never got close to 70 degrees while we were out there. Even when the sun came out we were running through at least intermittent shade so it didn't get too hot. So we had great scenery, I had good company on the run (thanks, Bree!), the shirt and medals were nice, the course support was great. I recommend this run.