I expected much different results from when I ran the half marathon last spring. I went through that season with serious breathing difficulties that affected every run. My breathing this year has been easy and most effortless. That was just one of the differences in the race this year.

It started with the expo. This year there was an actual expo at packet pickup. There were many vendors selling all kinds of stuff, anything you'd need for a race. I dropped a nice piece of change, mostly on boxes of very fairly priced Gu. Damn, I go through a lot of that stuff! The goody bag had a bunch of samples of foods and stuff, and lots of pamphlets for races.

The only disappointment was the shirt. Since the sizing was sex differentiated I had ordered the biggest women's shirt available, the XL. The full marathon shirt was a long sleeved, quarter zip white shirt with black trim. The front was plain, the logo on the back. I got my shirt and saw that Greenlight Apparel sizes their shirts the way Nike does: very small. There was a place for shirt exchanges. A woman who had ordered a small shirt tried on my XL and it fit her. I ended up with a men's shirt. It fits, but a zip on the shirt tends to chafe whatever it touches. Yup, on a woman that can lead to odd markings on cleavage. And, ouch!

Sunday morning I showed up early, the way I usually do. I was willing to pay $5 so I got an excellent parking spot in a close-by lot. The start area wasn't marked well but it was compact enough that I could find everything. I chatted with a few people I knew, hit the porta potties a couple of times (and there wasn't any line any time I went), checked my sweatshirt and went to the corrals.

The full marathon started well before the half so only marathoners were gathering. I was wearing my running skirt, a long sleeve shirt, leg compression sleeves and gloves. I was chilled but not terribly so; the weather promised good running conditions. I walked to the back where the 12+ minute milers were supposed to be and imagine my surprise when I saw nobody was there. Usually, even in a very small race, there will be people contesting to be last. Since this was a 7 hour race that welcomed walkers I had thought there would be, y'know, walkers! There were very few.

The anthem was sung, the confetti flew and we were off. I was hanging with a group of TnT newbies who were about my speed, possibly a little faster. I tried to keep to my plan of starting slowly but even the back-of-the-packers were faster than I wanted to be. I sped along with them, feeling pretty good, keeping to my 9:1 run:walk.

The first5 miles were flattish, a couple of inclines here and there. That changed once we started running along Highway 24. I knew it was hilly. Hell, I drive that way all the time and I can see the hills. I ran on, walking the very steepest parts. I was still feeling good, pushing but not killing myself. I peeped over my shoulder and saw one of my favorite views in the world: right down the center of the bay with Alcatraz and the Golden Gate Bridge in the middle. Gorgeous. Miles 7 and 8 were through Montclair and were hillier than I had expected but it was pretty so I didn't care.

About mile 8.5 I saw my bro and sis-in-law standing on the corner, cheering me on. This was a great boost for me. It's the first race where they've ever come to cheer (and that's through about 30 full and 50 half marathons). On that chill, overcast morning they stayed on the corner for about 45 minutes waiting for me. It gave me energy to finish up the hills.

I had thought that the worst of the hills were gone. Hell no. We ran alongside Highway 13 on Traflagar and Monterey and it went up and up. I walked lots of that. Just before Lincoln we took a little detour through a parking lot and it was even steeper. I felt insulted until I saw the fabulous view of the entire bay area. Gorgeous and worth the struggle.

Going into this race I knew that although there was a lot of uphill running, the elevation was all lost in a 2 mile stretch. I really felt on that street that I would go ass over tea kettle if I tripped so I was very careful of each step. Ok, now I'm wondering where that ancient expression came from; where would you have an ass over a tea kettle? Anyhoo.

The downhill was just as hard on my body as the uphill had been but my lungs were very happy for the break. I finished the hills and ended up in the Fruitvale, running on International Bldv. (or, East 14th Street as my brain keeps insisting). Know that this isn't the best part of the city. Know also that Oakland Police and marathon volunteers kept the street open for me. That's how it felt since the runners were so stretched out by then. My street. All by myself. I could just see the next runner ahead of me. It was pretty cool having this entire boulevard to myself.

By mile 16-17 I was having my normal slump. I was tired and a bit nauseous and my legs were starting to cramp. I made sure I was taking my gels every 40 minutes, confirmed that I was drinking enough of my Ultima and I took a salt tablet just in case. As I ran by Laney College and by Jack London Square I saw more runners and they seemed to be struggling just as I was. We'd chat, then run on.

Closing in on mile 19 I ran through the fire; the Crucible had set up a flaming arch for the runners and I powered through it. It was just about the last powering I could do. Bree was meeting me near the West Oakland BART station and right after I filled my bottle at the water stop I saw her. She joined me and we started running.

Then we stopped running. My legs were cramping horribly. I'd toe-off on the run, my toes would curl under and the cramp would follow straight up my leg. Owie owie ouch ouch. If I walked in a shuffle I didn't cramp. Run=cramp, walk=not cramp.

When I registered for this race I was torn between wanting a good 20 mile training run for my next full marathon and wanting a good full marathon to make up for my crappy Napa run. It looked like I would end up with the former. I wanted to run and I wanted to get it over with but even when I could run it was so slow that Bree just sauntered alongside of me. I snarled at her that she had to pretend to run if I was running. Heh. I'm not always nice after 4 hours of running.

It took me a good (er, a bad) 2 hours to go those last 6 miles. Oy, they went on forever. Except for miles 23-25 around Lake Merritt we were having a good time and just accepting that I couldn't go any faster. I got decidedly cranky when I had to wade through the mud around the Lake; the entire batch of halfers and almost all of the fullers had already churned the sodden path into a puddle, from the water to the wet muddy grass. Tiptoeing hurt!

We finally got back on the paved road and I sent Bree ahead to cheer me on. Actually I was just exceedingly grumpy and wanted to be by myself. Knowing me well she laughed and went up the road before me. 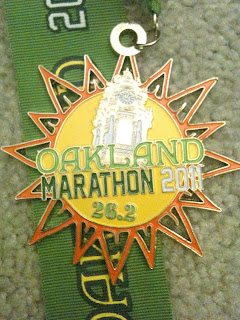 Each runner received 2 booze tickets attached to the bib. There was a choice of Barefoot wine or bubbly or that light beer. I went with a beer, feeling I'd get plenty loopy with wine and I could also use the fluids to rehydrate (that's my story and I'm stickin' with it!). I gave Bree the other ticket. She retrieved my checked bag so I could have my sweatshirt and we found a bench near the finish line that wasn't already occupied by a street person.

We drank our beer, we chatted and cheered the few remaining runners and watched the volunteers dismantling the finish line. I reflected on the race and I was happy. I could have (maybe should have) quit when I started cramping but I stumbled on to the end. I like to finish what I start!

Final thoughts. I thought the organizers did a wonderful job here. The only things I didn't appreciate were the poor signage at the start, the mud at the Lake and the tiny shirt. I fully appreciated the efficient packet pickup, I liked the expo and the easy parking, I enjoyed the incredible course volunteers and the Oakland Police who not only kept the roads clear and safe but cheered when I passed. I loved the 2 beautiful views from the tops of the hills. The people of Oakland supported the race and the runners for hours while the stragglers finished. The weather was almost perfect for running, cool and overcast with some wind. I was in pain and still enjoyed myself. The first half was one of, if not the, hardest half marathons I've ever run, but it was so scenic and well supported that it was a good challenge instead of a pain in the neck. The second half was grittier and showed the best side of Oakland. I highly recommend this race! 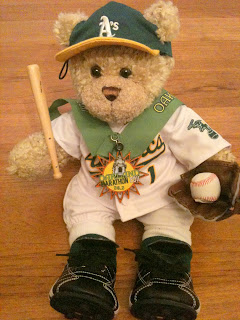 this little bear needs a name
p.s. Thank you to Bree for running and walking and staggering with me and for putting up with my foul humor at the end. You're the best!
Posted by Amy at 10:30 PM 2 comments: