Full disclosure first. The Napa Valley Marathon has a firm 6 hour cutoff. When I registered for the race I was on track for a 5:45 full marathon, easily. It didn't happen. I finished the race in 6:04 as they were pulling down the finish line so I'm not an official finisher. I'm not listed in the results. But I ran the course, got the shirt/pack/medal so I'm an unofficial finisher.

I got to Napa on Saturday morning and went straight to the expo. Pickup of my bib, shirt and most excellent backpack was quick and easy. They use the D-Tag for timing instead of a chip. There was a choice of a black or dark gray bag or a dark gray backpack. Since I have very nice bags from Flying Pig and TnT I got the backpack. A friendly volunteers wrote my race number on a plastic tag so I could use the pack as a sweat check bag. 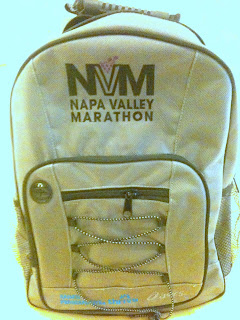 The race shirt was a lightweight, long sleeve white tech fabric. We all know how little I like white shirts but I'm apparently a minority. The logo, on the front of the shirt, was very cool. 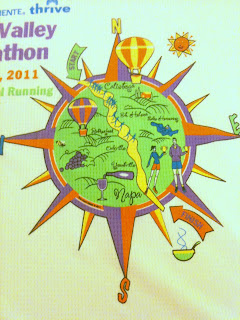 The expo had a few booths selling various things and promoting other races. The only things I wanted was a race-branded running cap (which they didn't have) and Gu Chomps (didn't have those either). The whole thing took me about 10 minutes.

For the past 10 days I had been obsessively checking the weather forecast and it kept telling me it would rain during the race. I very much hoped that the meteorologists were confused but for once they were entirely correct. It started raining early Saturday evening.

I had dithered about what to wear during the race and had brought every possible choice with me to Napa. I decided that since it was going to be warm-ish (low-50s), rainy and windy that I'd go with my running skirt, calf compression sleeves, a cap sleeve running shirt and my lightweight running jacket. I had buffs and my hat, throw away gloves and a throw away poncho. I wore my heavier weight rain jacket and decided I could throw it in my sweat bag before the start.

My alarm went off at 4:05 am and it was raining heavily outside. I did the morning stuff and checked out of the hotel at 4:55 - it was pouring. I drove to the school, the finish area, parked my car and walked to the bus line. The race uses school buses to take runners to the start in Calistoga. The drive was in the dark and I stared out the window at the rain.

My bus arrived and the day got lighter. The rain didn't. Although we were allowed to remain on the bus until about 15 minutes prior to the start I decided to try to get to the porta potty lines before they were too long. There weren't many porta potties and the lines were already long. I waited almost 15 minutes and I know the lines got even longer behind me. When I was done I decided it was warm enough to leave my light weight jacket in my pack and to go with my poncho and gloves.

I checked my bag and walked to the back of the start area. There weren't any pace indicators so I just kept backing up as more people joined the crowd. I didn't have long to wait before the anthem and the start. I moved forward and I was off! It was raining enough that it was annoying. Not just our usual California mistordrizzle, this was rain. I tied up my poncho so it didn't get in my way and ran on. There were lots of people running my pace or run:walking my pace and I would see the same people over and over for the next several hours.

The first 23 miles of the race were directly down the Silverado Trail. No chance of getting lost on this race! I always try to run tangents but wasn't able to here. The road was very curvy and each turn was heavily banked. Running a tangent would have cut the distance at the cost of running up and down each slant, including running on the canted portion for quite a bit. The flattest part of the road was the outside turn, the longest distance on each corner. I ended up picking each individual route based upon what looked easiest to me. The road wasn't crowded so it was easy to run anywhere I wanted.

I felt well enough, if a bit weather-grumpy, for the first 6 miles. That was the last time I felt well. In the immortal words of Randy, I just wasn't feelin' it, dawg. I was hoping I wouldn't see anyone I knew at the infrequent road crossings where the few soggy cheering people gathered; I was ready to hop in the car of the first acquaintance. Luckily, my friends were all smart enough to stay away.

It got worse as I kept running. The rain continued, varying from heavy rain to mist. The entire time I was out there it never completely cleared up. That wasn't the worst though. There was also a very steady headwind the entire morning. The good news was that I wasn't freezing, just cool, wet and miserable.

I got through the half in good time, not breaking any records but still on track for a decent finish. I had my upper teen slump and I didn't think I'd get out of it. I wasn't having fun, wasn't enjoying myself. I kept trying to jolly myself out of the grumps but didn't have much luck. Soggy wildflowers and mustard, dormant grapevines and a never-ending road got incredibly boring. Race policy is no headphones so I didn't have any music. Of course, it probably would have shorted out in the rain even if I had brought my iPod. There was nothing to do except circle through my thoughts over and over and most of those thoughts weren't pleasant.

Once I got to the 20s I was done, toast, baked, finished. I honestly didn't care if I finished but I didn't know any way to get back to my car except to keep moving forward. I had stopped a few times to refill my bottle but otherwise never stopped moving. Not even to remove the little stone that got in my shoe during mile 7. My feet were so wet that a little rock didn't make much difference to my comfort. 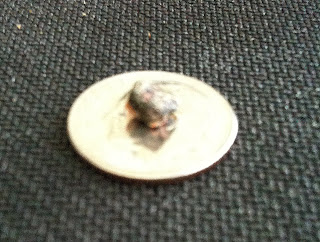 that's a dime - with the stone that accompanied me for 19 miles
I knew if I could just keep my pace during the 20s I would finish well within the allowed 6 hours. I tried, I really did, but my legs and brains had a big disconnect. I tossed my gloves, wrung out my skirt for about the 12th time and moved on. I kept up my nutrition, sucking down a gel every 40 minutes. I made sure I was hydrated even though I wasn't thirsty. I moved onward.

At that point I was still within the race's timeline but the road was opened to 2-way traffic while I was still on Silverado. I didn't mind the cars speeding past (too much) but I didn't need the buses and RVs spewing diesel in my face. My breathing got bad enough that I slowed to use my inhaler but that didn't help much.

Finally turning off Silverado gave my brain a boost but my legs got even slower. I knew, KNEW, that if I didn't maintain my speed I wouldn't finish in time but I just couldn't move faster. There were still quite a few other stragglers with and behind me. I finally got to where Mr. Garmin was telling me the end was close. I knew I was at least .2 ahead of course markings since I hadn't run tangents. I had to figure my math to include at least 2 minutes more than planned. It turned out that wouldn't have helped.

There were only a few corners left but I knew I was too slow by that point. I heard a crowd coming up behind me, some TnT people running in their friend. One broke off from the group and told me she was running me in since they were in the process of tearing down the finish and we only had 2 minutes. I blearily looked at her and realized I could still finish and possibly even be counted. I picked it up. She told me to go faster and I did. I was huffing and puffing and she was encouraging and cheering, the first really friendly person I'd seen for hours. She left me at the fences and told me to get going. So I did. I could see that the first timing mat was still there but the second was being removed. I crossed, had my picture taken and a volunteer draped the pretty medal around my neck. I turned off Mr. Garmin, took a peek and knew my 26.4 miles would be unofficial. 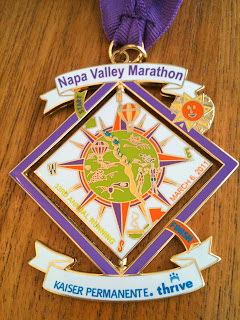 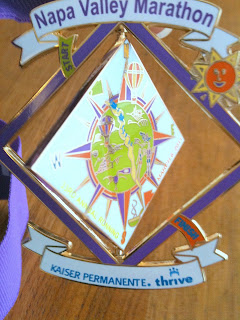 look - it spins!
The volunteer wouldn't let me stop (since I was gasping for air and shaking) but handed me a bottle of water and kept me walking. I got a heat sheet and was pointed onward. Another volunteer pointed out the building with hot soup but I couldn't stand the thought of food, I just wanted to lie down for a few hours. I retrieved my pack (very easy since there were only a couple dozen left) and went to the locker room.

Hot showers were available but I was too pooped to take advantage. I finally got the energy to strip off my soaking clothing and put on dry clothes, stretched a bit, and went to my car to start the long drive home.

My final thoughts: yuck. The route was pretty but unchanging. Even had it been sunny and clear it would have been 26 miles of the same stuff over and over. Even paradise gets boring after running through it for 6 hours and this was not paradise. I'm perfectly happy running by myself for long periods (time and space) but that was too much. It was monotonous. The race was well organized, premiums good, but I don't need to do this again. Without the relentless rain I think I would have felt better about the entire thing but I still would have been bored.

Thanks to the rain I'm blistered and chafed in places I don't normally chafe. I'm much more sore than I've been after my last few marathons and that's probably from the canted roads. I'm not happy with my performance so I'm hoping to redeem that in 3 weeks (and again 3 weeks after that). I can do better.
Posted by Amy at 10:15 PM 5 comments:

Damn the weather, full speed ahead

I keep telling myself that I'm resigned to the fact that my first running of the Napa Valley Marathon will involve rain, wind, cold and plenty of obscenities. I repeat to myself that I've run freezing marathons (several of them in fact), rainy marathons (Erie), windy marathons (Shamrock), hilly marathons (lots of those too). I remind myself that I'm well trained and perfectly capable of running fast enough to make the 6 hour cut-off. Then I finally decide that it doesn't matter, I paid my money and I'm running this thing unless the earth opens up and swallows me first.

Whatever happens, it's sure to be interesting.
Posted by Amy at 8:25 AM 1 comment: