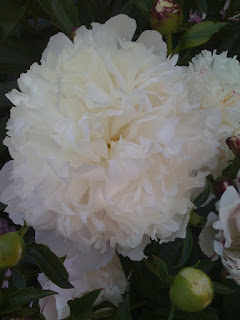 Something about flowers in bloom and 98 degrees means summer to me. A wall of fragrant jasmine, giant peonies, sweet lemon flowers among the thorns. Smoggy blue skies tinged with brown around the edges. Time to run!

So run we did. On Saturday Bree, Anita and I were joined by Ellen at the Alameda Ferry parking lot. We were hoping it would be cool along the water and we were completely disappointed. Usually there's a cool strong breeze making up for the total lack of shade along the route but it was only a measly fluff of wind here and there. It was hot, the hottest weather we'd run in this year. So to gradually acclimate ourselves to to the heat we decided on a short run.

Or, that would have been the smart thing to do. In our my quest to get up to double digits we were scheduled to run 11 miles and I didn't want to change that. I'm afraid that if we change the schedule this early in the season it will just be too easy to change it later. That meant running, walking or crawling 11 miles however we could.

Soon after we began our group split up since Ellen is speedier than we are, and Bree was running a 4:1 while Anita and I were running a 9:1. We all met up at Crown Beach, halfway along, and ran together again for a short while. Once again Ellen pulled ahead, but we stayed with Bree for a couple of miles. At that point it because a chore to get done with, an obligation, instead of just a fun run. It was hot, I was sweaty and verging on overheating. 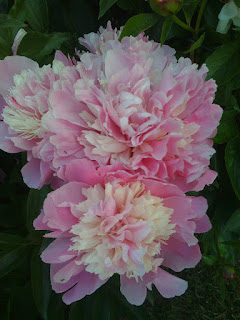 But finish it we did! It was ugly, it was slow, and there was way more walking than made me happy but it was still 11 miles. I was literally wringing, dripping wet. Sausage fingers and a slight dehydration headache reminded me that I wasn't ingesting enough electrolytes with too little water. That would be why they're called practice runs, right?

I don't understand why it's so hard, why it isn't getting any easier. Granted, we're increasing mileage constantly. Also granted, it was our first hot long run of the year. Finally granted that the air quality wasn't too good. However and what the hell? I haven't had a good run in double digits since early last year. I'm happy that my knee and back are ok for now but I have no endurance or stamina. Even the short easy runs feel hard. That has to change.

Oh! Those little black bits on the lovely flowers? Ants. Lots of ants. Zillions of ants. I won't be picking the flowers and bringing them into the house no matter how lovely or fragrant. Ew. 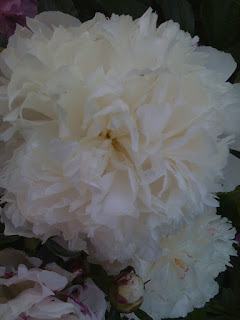